Professor Hanson: further evidence against the ridiculous concept that ME/CFS is psychological 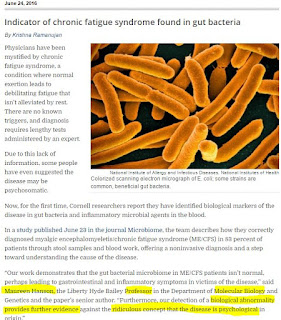 Professor Maureen Hanson: "our detection of a biological abnormality provides further evidence against the ridiculous concept that the disease is psychological in origin"

In a study published June 23 in the journal Microbiome, the team describes how they correctly diagnosed myalgic encephalomyeletis/chronic fatigue syndrome (ME/CFS) in 83 percent of patients through stool samples and blood work, offering a noninvasive diagnosis and a step toward understanding the cause of the disease.

“Our work demonstrates that the gut bacterial microbiome in ME/CFS patients isn’t normal, perhaps leading to gastrointestinal and inflammatory symptoms in victims of the disease,” said Maureen Hanson, the Liberty Hyde Bailey Professor in the Department of Molecular Biology and Genetics and the paper’s senior author.

“Furthermore, our detection of a biological abnormality provides further evidence against the ridiculous concept that the disease is psychological in origin,” 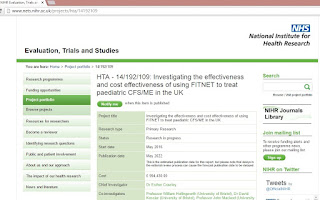 Ester Crawley's Study will be based on the following Dutch study also called FITNET which ignored their own NULL effect just like the PACE trial did. 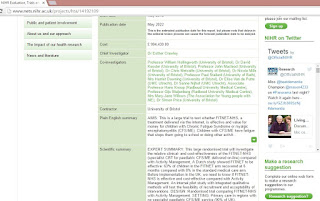 Because it's obviously more important to make sure that people who are severely ill do not get proper treatment and to make sure that their kingdom which is based on fake tan doesn't come tumbling down. The Sad State of Affair of greed and denial medicine ...

"Cognitive behavioral therapy (CBT) is known to be an effective treatment of adolescents with chronic fatigue syndrome (CFS), but its availability is limited." No it's not known to be effective but they want us to believe it is effective which is a totally different thing ... The reality is, as a recent review of the PACE trial showed, that CBT and GET are totally useless !!! But the BIG LIE must obviously continue ...

"Fatigue in Teenagers on the Internet (FITNET), an Internet-based CBT program for adolescents with CFS, has been developed as an alternative to face-to-face CBT. Recently, its short-term effectiveness has been proven in a randomized clinical trial. Here we aimed to assess the long-term outcome of CFS in adolescents after FITNET treatment and after usual care."

"Conclusion: The short-term effectiveness of Internet-based CBT on adolescent CFS is maintained at LTFU. At LTFU, usual care led to similar recovery rates, although these rates were achieved at a slower pace."

"At LTFU, usual care led to similar recovery rates" aka as a NULL effect ...