Breaking news: Cause of ME/CFS is in the blood 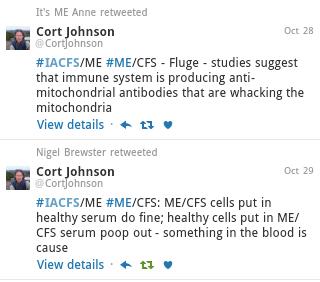 NICE takes a dim view of foreign work on ME/CFS after first consulting a third party ... 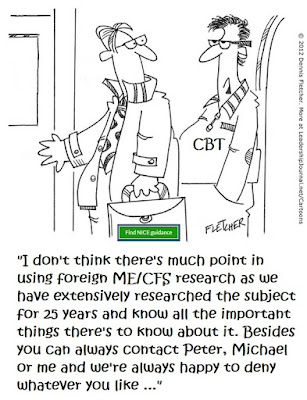 Why the MEGA project wants to use a broad definition 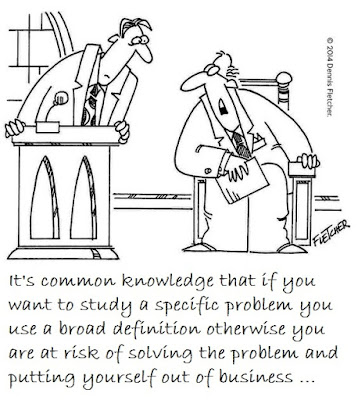 MEGA is a great project but not with Crawley and her Pinocchio friends on board ... 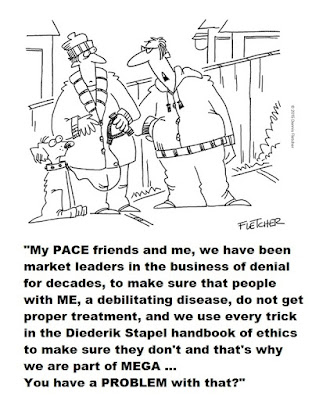 Does "the President of The Royal College of Psychiatrists condones what is widely considered to be scientific fraud?"

Posted on behalf of Margaret Williams:
Simon Wessely is at pains to distance himself from involvement with the PACE trial, but once again he seems to have overlooked the facts.
The Trial Identifier is clear:
“Section 4. TRIAL MANAGEMENT
4.1 WHAT ARE THE ARRANGEMENTS FOR THE DAY TO DAY MANAGEMENT OF THE TRIAL?
The trial will be run by the trial co-ordinator who will be based at Barts and the London, with the principal investigator (PI), and alongside two of the six clinical centres. He/she will liaise regularly with staff at the Clinical Trials Unit (CTU) who themselves will be primarily responsible for randomisation and database design and management (overseen by the centre statistician Dr Tony Johnson), directed by Professor Simon Wessely, in collaboration with Professor Janet Darbyshire at the MRC CTU.
4.4. WHAT WILL BE THE RESPONSIBILITIES OF THE NAMED COLLABORATORS?
Prof Simon Wessely will oversee the CTU”
It also needs to be recalled that the post of Statistician Clinical Trials Unit Division of Psychological Medicine Ref No: 06/A09 was described as the “Johnson_Wessely_Job” (07/07/2006) at The Institute of Psychiatry where: “The team works under the direction of Professor Simon Wessely, the Unit Director. The team is supported by the regular input of a Unit Management Group from within the Institute of Psychiatry. The statisticians within the Unit also have regular supervision meetings with Dr Tony Johnson from the MRC Clinical Trials Unit. The post holder will be directly responsible to the CTU Manager (Caroline Murphy), supervised by the CTU Statistician (Rebecca Walwyn) and will be under the overall direction of the Head of Department, Professor Simon Wessely”.
So please, Professor Wessely, stop dissembling, as you are fooling no-one but yourself.
Despite the fact that post-hoc changes showed reported results that were up to five times better than those derived from the original protocol, you continue to defend what has been described by many as “fraud” in the PACE trial.
Can it be said that the President of The Royal College of Psychiatrists condones what is widely considered to be scientific fraud?
Margaret Williams
http://www.margaretwilliams.me 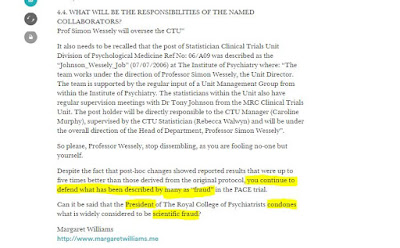 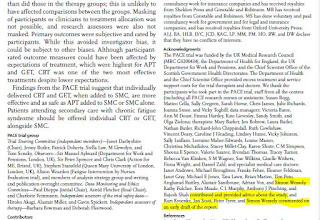 The PACE trial and jumping without a parachute ... 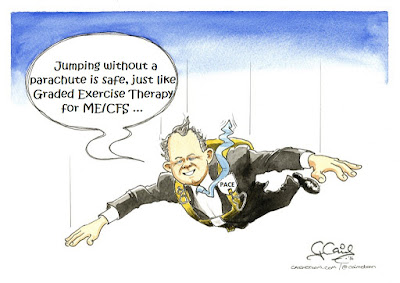