Psychologist Prof Coyne on #PACEtrial's CBT for #MEcfs: condescending pseudoscience presented to convince patients that their problems were in their heads

from Danish RCT of cognitive behavior therapy for whatever ails your physician about you | Mind the Brain http://blogs.plos.org/mindthebrain/2016/12/07/danish-rct-of-cognitive-behavior-therapy-for-whatever-ails-your-physician-about-you/

Sir Simon Wessely (the godfather of PACE): The PACE trial simply made whatever adjustments they needed in order to get the results they wanted

Sir Simon Wessely (the godfather of PACE): The PACE trial simply made whatever adjustments they needed in order to get the results they wanted

As for the PACE authors themselves, I doubt that anything will make a difference. They had clearly decided how the trial was going to turn out before they even started it, and I can’t see anything changing their views about it now, whether peer reviewed or otherwise.

PACE was not a voyage of discovery. As the godfather of PACE, Sir Simon Wessely, inadvertently revealed, they always knew exactly where they wanted to get to.

They simply made whatever adjustments they needed in order to get there. They live in a world where they are right, patients are wrong, and the facts can be changed to support that. I doubt they’re open to any kind of reason.

Or as Professor Steven Lubet, a Professor of Law at Northwestern University, recently stated:

"Finally, you point to your own blog post, which ironically undermines your very point. You compare the PACE Trial to an ocean liner plotting a course from Southampton to New York, and express satisfaction that it made the trip “successfully across the Atlantic,” despite course corrections along the way.

But surely you realize that a randomized controlled study is not supposed to have a fixed destination, but rather should follow wherever the evidence – or the current, to maintain the metaphor -- leads.

You thus virtually admit that the PACE Trial was always intended to reach a particular result, and that adjustments along the way were necessary to get it there.  Just so." 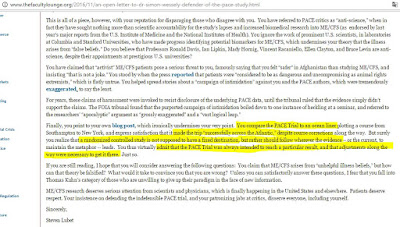