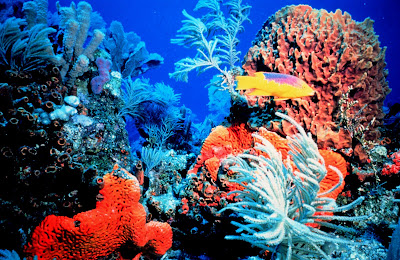 I wanted to note an alarming report published by the World Resources Institute (WRI) on the risks facing coral reefs.

The short version: coral reefs are in big trouble. That's not exactly surprising—coral reefs around the planet have already been badly damaged by bleaching events and destructive fishing practices. But the WRI report shows that reefs face an existential threat from climate change, pollution and overfishing over the next several decades—and there's a significant chance that we could see massive extinctions. 75% of coral reefs are already threatened, but if we continue down business as usual, nearly all of the world's coral reefs will be at risk by mid-century.
<--->

Coastlines protected by reefs are more stable, more resistant to erosion, than those without. Up to 90 percent of the energy from wind-generated waves is absorbed by reef ecosystems. In Belize alone, coastal protection afforded by reefs and mangroves provides an estimated $231 to $347 million dollars in avoided damages per year. Read more>>
Posted by Dr Speedy at 2:25 AM