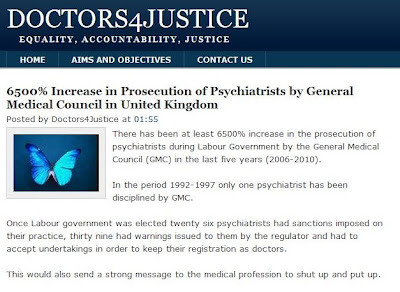 There has been at least 6500% increase in the prosecution of psychiatrists during Labour Government by the General Medical Council (GMC) in the last five years (2006-2010).

In the period 1992-1997 only one psychiatrist has been disciplined by GMC.

Once Labour government was elected twenty six psychiatrists had sanctions imposed on their practice, thirty nine had warnings issued to them by the regulator and had to accept undertakings in order to keep their registration as doctors.

This would also send a strong message to the medical profession to shut up and put up. Read more>>
Posted by Dr Speedy at 3:24 AM