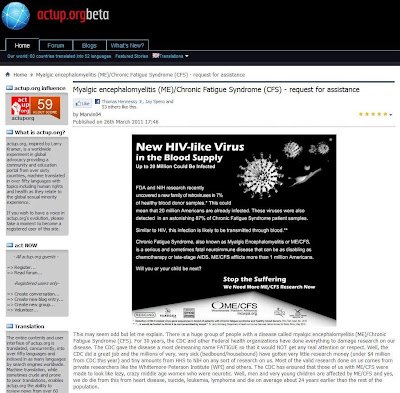 This may seem odd but let me explain. There is a huge group of people with a disease called myalgic encephalomyelitis (ME)/Chronic Fatigue Syndrome (CFS). For 30 years, the CDC and other Federal health organizations have done everything to damage research on our disease. The CDC gave the disease a most demeaning name FATIGUE so that it would NOT get any real attention or respect. Well, the CDC did a great job and the millions of very, very sick (bedbound/housebound) have gotten very little research money (under $4 million from CDC this year) and tiny amounts from HHS to NIH on any sort of research on us. Most of the valid research done on us comes from private researchers like the Whittemore-Peterson Institute (WPI) and others. The CDC has ensured that those of us with ME/CFS were made to look like lazy, crazy middle age women who were neurotic. Well, men and very young children are affected by ME/CFS and yes, we do die from this from heart disease, suicide, leukemia, lymphoma and die on average about 24 years earlier than the rest of the population.

There was a Retrovirus study done in the mid-late 1980's that showed there was another Retrovirus in addition to HIV - OUR Retrovirus. But the CDC destroyed replication and NIH stopped all further funding on this Retrovirus (Drs. Defrietas, Cheney, Bell) until just about three or so years ago when it was found that this Retrovirus (or part of its family) did in fact cause an aggressive form of Prostate cancer. The people at WPI picked the retrovirus study up and tested to see if people with ME/CFS might have the retrovirus --- and sure enough, the numbers came back very high. The FDA and NIH also did a replication study and found the numbers of ME/CFS sick that have the new Retrovirus to be even higher than the WPI/CC/NCI study! The CDC, as expected, did not find the retrovirus in our systems but they had forecasted that would be the case. Read more>>
Posted by Dr Speedy at 3:41 AM