38 patients at risk of CJD after surgery in south Wales 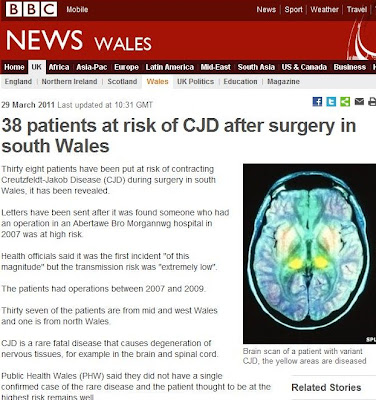 Thirty eight patients have been put at risk of contracting Creutzfeldt-Jakob Disease (CJD) during surgery in south Wales, it has been revealed.

Letters have been sent after it was found someone who had an operation in an Abertawe Bro Morgannwg hospital in 2007 was at high risk.

Health officials said it was the first incident "of this magnitude" but the transmission risk was "extremely low".

Thirty seven of the patients are from mid and west Wales and one is from north Wales.

CJD is a rare fatal disease that causes degeneration of nervous tissues, for example in the brain and spinal cord.

Public Health Wales (PHW) said they did not have a single confirmed case of the rare disease and the patient thought to be at the highest risk remains well.

The initial operation took place in one of four hospitals - Singleton and Morriston in Swansea, Neath Port Talbot General or the Princess of Wales in Bridgend.

Health officials are not naming the hospital to protect the identity of the high risk patient. Read more>>
Posted by Dr Speedy at 3:39 AM