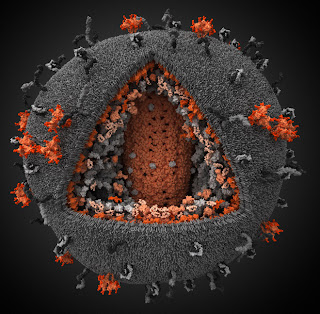 Rather than destroying HIV, a proposed treatment would embrace its infectious abilities, sending the virus into competition with a harmless, stripped-down version of itself.

Dubbed therapeutic interfering particles, or TIPs, these engineered viral scraps would ride with HIV as it spreads from person to person. By out-competing HIV for cellular resources, the TIPs might slow its progression and lower infection rates.

Approximately 33 million people now carry HIV, or human immunodeficiency virus, which infects immune system cells that defend against disease. The virus gradually destroys them, taking away the body’s ability to protect itself. Without treatment, HIV infection leads to AIDS in about 10 years. Death follows soon after as common diseases overcome the body.

First proposed in 2003 and tested in cell cultures, Weinberger’s TIPs are HIV’s genetic code stripped down to one-third its original size. TIPs lack crucial pieces that allow self-replication, and copy themselves by sneaking into HIV’s genetic code and multiplying when it does.

TIPs also contain some HIV-inhibiting sequences and compete for the same virus-building proteins as HIV. As a consequence, TIPs may slow the replication of infectious HIV, fending off AIDS for an extra 5 to 10 years.

Although TIPs have not left the lab and don’t represent a cure, Weinberger said they would complement other treatments, including widely used anti-retroviral therapies. By reducing the HIV load in an infected person, TIPs could also reduce the chances it will spread. Read more>>
Posted by Dr Speedy at 9:18 AM