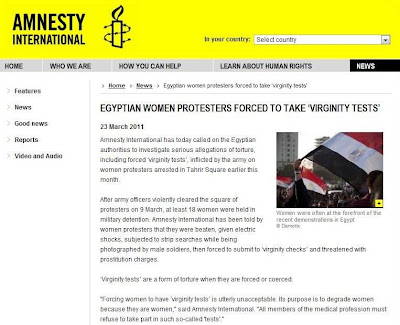 Amnesty International has today called on the Egyptian authorities to investigate serious allegations of torture, including forced ‘virginity tests’, inflicted by the army on women protesters arrested in Tahrir Square earlier this month.

After army officers violently cleared the square of protesters on 9 March, at least 18 women were held in military detention. Amnesty International has been told by women protesters that they were beaten, given electric shocks, subjected to strip searches while being photographed by male soldiers, then forced to submit to ‘virginity checks’ and threatened with prostitution charges.

‘Virginity tests’ are a form of torture when they are forced or coerced.

"Forcing women to have ‘virginity tests’ is utterly unacceptable. Its purpose is to degrade women because they are women," said Amnesty International. "All members of the medical profession must refuse to take part in such so-called 'tests'."

20-year-old Salwa Hosseini told Amnesty International that after she was arrested and taken to a military prison in Heikstep, she was made, with the other women, to take off all her clothes to be searched by a female prison guard, in a room with two open doors and a window. During the strip search, Salwa Hosseini said male soldiers were looking into the room and taking pictures of the naked women.

The women were then subjected to ‘virginity tests’ in a different room by a man in a white coat. They were threatened that “those not found to be virgins” would be charged with prostitution.

According to information received by Amnesty International, one woman who said she was a virgin but whose test supposedly proved otherwise was beaten and given electric shocks.

“Women and girls must be able to express their views on the future of Egypt and protest against the government without being detained, tortured, or subjected to profoundly degrading and discriminatory treatment,” said Amnesty International.

“The army officers tried to further humiliate the women by allowing men to watch and photograph what was happening, with the implicit threat that the women could be at further risk of harm if the photographs were made public.” Read more>>
Posted by Dr Speedy at 1:20 AM