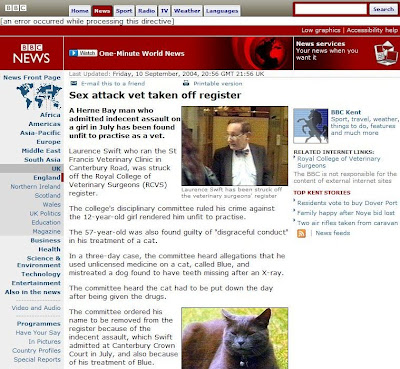 A Herne Bay man who admitted indecent assault on a girl in July has been found unfit to practise as a vet.

Laurence Swift who ran the St Francis Veterinary Clinic in Canterbury Road, was struck off the Royal College of Veterinary Surgeons (RCVS) register.

The college's disciplinary committee ruled his crime against the 12-year-old girl rendered him unfit to practise.

The 57-year-old was also found guilty of "disgraceful conduct" in his treatment of a cat.

In a three-day case, the committee heard allegations that he used unlicensed medicine on a cat, called Blue, and mistreated a dog found to have teeth missing after an X-ray.

The committee heard the cat had to be put down the day after being given the drugs.

The committee ordered his name to be removed from the register because of the indecent assault, which Swift admitted at Canterbury Crown Court in July, and also because of his treatment of Blue. Read more>>
Posted by Dr Speedy at 7:42 AM