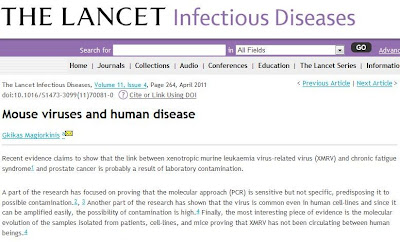 Recent evidence claims to show that the link between xenotropic murine leukaemia virus-related virus (XMRV) and chronic fatigue syndrome1 and prostate cancer is probably a result of laboratory contamination.

Finally, the most interesting piece of evidence is the molecular evolution of the samples isolated from patients, cell-lines, and mice proving that XMRV has not been circulating between human beings.4

Nevertheless, the paper by Lombardi and colleagues5 that began this debate provided solid evidence based not only on the molecular identification of the virus, but also on immunological responses of the host (virus-specific antibodies), viral expression in patients' peripheral blood mononuclear cells (flow cytometry), and an infection model (infection of cultured human cells from patients' samples).

Recently, a model of rhesus macaques enforced the evidence for the infectious potential of XMRV.6 The immunological and infection evidence cannot be explained by nucleic acid contaminations.

Thus, the only explanation for the molecular evolution data, from a study by Hue and colleagues,4 is that the patients have been infected by a common source of XMRV and not through human contact.

Once a virus is endogenised, it is forced to follow the evolutionary rate of the host. Since XMRV is integrated in cell-lines the virus evolution is restricted to the host's pace of evolution, and viral descendants have none or minimum sequence diversity. Thus, if a contaminated product, previously cultured in cell-lines, is administered to people then the infections would provide the evolutionary patterns reported by Hue and colleagues.4

If the immunological data reported by Lombardi and colleagues5 are correct, then we need to trace the common source for these infections to prevent possible public health concerns. Products from cell-lines should be the first candidates.

GM is supported by a Wellcome Trust grant.
Posted by Dr Speedy at 3:03 AM