Dr. Lapp on XMRV & Ampligen - Information that may “change the field of medicine forever” 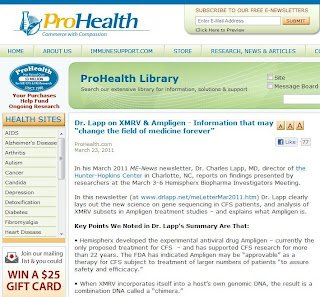 In his March 2011 ME-News newsletter, Dr. Charles Lapp, MD, director of the Hunter-Hopkins Center in Charlotte, NC, reports on findings presented by researchers at the March 3-6 Hemispherx Biopharma Investigators Meeting.

In this newsletter (at www.drlapp.net/meLetterMar2011.htm ) Dr. Lapp clearly lays out the new science on gene sequencing in CFS patients, and analysis of XMRV subsets in Ampligen treatment studies – and explains what Ampligen is.

Key Points We Noted in Dr. Lapp's Summary Are That:

• Hemispherx developed the experimental antiviral drug Ampligen – currently the only proposed treatment for CFS – and has supported CFS research for more than 22 years. The FDA has indicated Ampligen may be “approvable” as a therapy for CFS subject to treatment of larger numbers of patients “to assure safety and efficicacy.”

• When XMRV incorporates itself into a host’s own genomic DNA, the result is a combination DNA called a “chimera.”

• When cell death (apoptosis) occurs, these “chimeras are spilled into the bloodstream.”

• A company called Chronix Biomedical, which has developed a very fast way to map genomes, has found chimeras with XMRV genes in the genomes of CFS patients.

• As Dr. Lapp states, “The Chronix technology is wonderful news for PWCs (people with CFS), because if XMRV or MLV can be clearly shown to cause CFS, then we will have an inexpensive and unique marker for the disorder.”

• Not available commercially yet, the test will be used in future Hemispherx CFS studies.

• When Hemispherx studied 208 CFS patients whose exercise tolerance improved on Ampligen in trials - based on whether they were XMRV positive or negative – the analysis suggested that the one-third who tested XMRV positive “have an edge in responding to Ampligen.”

• Dr. Lucinda Bateman’s clinic in Salt Lake City will soon resume treatments, and Hemispherx plans to add several more US study sites – “in addition to sites in Mexico and Argentina.”
Posted by Dr Speedy at 4:44 AM

Dr Derek Enlander of the New York ME/CFS Clinic in New York is part of the Hemispherx Ampligen Study and has recruited patients from the local New York Metropolitan area and as far away as Hong Kong.