GETSET: when your mates are the trial steering committee ... 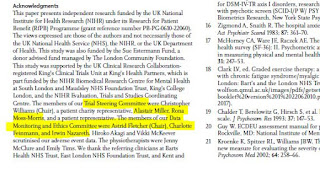 No problem making Endpoint changes during an unblinded trial if your mates who also ignore all the evidence that #MEcfs is a physical disease (PACE trial's Alastair Miller (infectious disease specialist and former Action for ME Medical advisor, the only "ME charity" that was part of the PACE trial and psychologist Rona Moss- Morris) are the trial steering committee and your PACE trial mates are part of the Data Monitoring and Ethics Committee.

In 2012 a group of doctors in the UK wrote a letter to the Independent on Sunday and all British newspapers to condemn the harassment and death threats by patients of Simon Wessely of which he had never provided any evidence; the foi commissioner last year ruled that the psychiatrists had grossly exaggerated things/made things up and that there were no death threats. Amongst those signing that letter were: the three principal investigators of the PACE trial (Peter White, Michael Sharpe and Trudie Chalder), Alastair Miller, Rona Moss-Morris, Charlotte Feinmann, Esther Crawley, and MEGA's chairman Stephen Holgate. http://www.independent.co.uk/voices/letters/ios-letters-emails-online-postings-2-december-2012-8373777.html
Posted by Dr Speedy at 4:37 PM No comments: 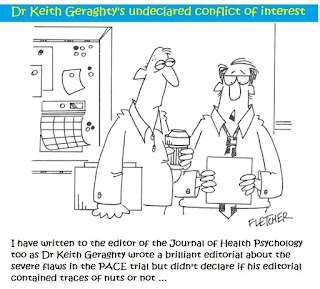 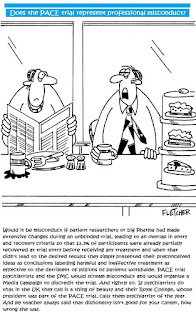