Human Herpesvirus 6 (HHV-6) is an immunosuppressive and neurotropic virus 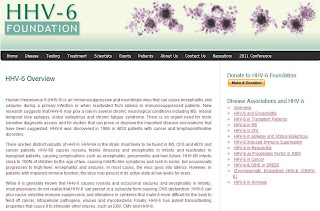 Human Herpesvirus 6 (HHV-6) is an immunosuppressive and neurotropic virus that can cause encephalitis and seizures during a primary infection or when reactivated from latency in immunosuppressed patients.

New research suggests that HHV-6 may play a role in several chronic neurological conditions including MS, mesial temporal lobe epilepsy, status epilepticus and chronic fatigue syndrome. There is an urgent need for more sensitive diagnostic assays and for studies that can prove or disprove the important disease associations that have been suggested. HHV-6 was discovered in 1986 in AIDS patients with cancer and lymphoproliferative disorders.

There are two distinct variants of HHV-6. HHV-6A is the strain most likely to be found in MS, CFS and AIDS and cancer patients. HHV-6B causes roseola, febrile illnesses and encephalitis in infants and reactivates in transplant patients, causing complications such as encephalitis, pneumonitis and liver failure. HHV-6B infects close to 100% of children by the age of two, causing mild flu-like symptoms and rash in some, but occasionally progresses to high fever, encephalitis and seizures. In most cases, the virus goes into latency. However, in patients with impaired immune function, the virus may persist in its active state at low levels for years.

While it is generally known that HHV-6 causes roseola and occasional seizures and encephalitis in infants, most physicians do not realize that HHV-6 can persist in a subacute form causing CNS dysfunction. HHV-6 can also cause selective immune suppression and alterations in cytokines that make it more difficult for the body to fend off cancer, intracellular pathogens, viruses and mycobacteria. Finally, HHV-6 has potent transactivating properties that cause it to stimulate other viruses, such as EBV, CMV and HHV-8. Read more>>
Posted by Dr Speedy at 2:37 AM