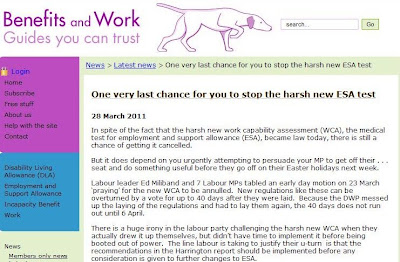 In spite of the fact that the harsh new work capability assessment (WCA), the medical test for employment and support allowance (ESA), became law today, there is still a chance of getting it cancelled.

But it does depend on you urgently attempting to persuade your MP to get off their . . . seat and do something useful before they go off on their Easter holidays next week.

Labour leader Ed Miliband and 7 Labour MPs tabled an early day motion on 23 March ‘praying’ for the new WCA to be annulled. New regulations like these can be overturned by a vote for up to 40 days after they were laid. Because the DWP messed up the laying of the regulations and had to lay them again, the 40 days does not run out until 6 April.

There is a huge irony in the labour party challenging the harsh new WCA when they actually drew it up themselves, but didn’t have time to implement it before being booted out of power. The line labour is taking to justify their u-turn is that the recommendations in the Harrington report should be implemented before any consideration is given to further changes to ESA.

So, please consider contacting your MP as a matter of urgency and ask them to support EDM 1651 to try to halt this shameful new test which discriminates against many seriously sick and disabled claimants including, for example, blind people with guide dogs. Read more>>
Posted by Dr Speedy at 2:34 AM