Study demonstrates that 95% of ME/CFS Patients have Anticardiolipin Antibodies, suggesting that ME/CFS may be an autoimmune condition 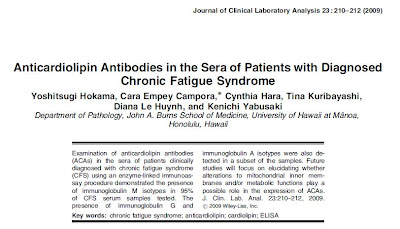 DISCUSSION A survey of the literature reports ACAs as common serological markers in many different types of diseases, including viral diseases such as illnesses resulting from chemical (1) and marine toxin exposure (4,5,6), HIV (7,8) and Epstein-Barr virus (9), hematological cancers including CLL and acute myelocytic leukemias, exposure to fungal organisms, malaria, and staphylococcus infections (10,11), and autoimmune diseases such as multiple sclerosis, systemic lupus erythematosus, autoimmune hepatitis, and more (2). This study demonstrates that a large percentage of patients clinically diagnosed with CFS have elevated levels of the IgM isotype to CL (95%), suggesting that CFS may be an autoimmune condition. As a possible autoimmune disease, CFS patients may be treated by suppression of the ACA or by diminishing the antigen CL in serum. Previous studies have shown that treatment with monoclonal antibodies to B cells reduces ACA levels to normal in patients with autoimmune disease, leading to clinical improvements.

Therefore, classification of CFS as an autoimmune disorder may serve to increase the availability of treatment options for patients suffering from the disease.

Experiments are underway to further elucidate why ACAs are produced in individuals afflicted with CFS.

Such studies include investigating the effects of specific chemical agents, marine toxins, and ACAs on mitochondrial metabolic pathways that are indicative of reduced or blocked energy production that may lead to the fatigued state in CFS.
Such studies may lead to the development of potential therapeutic agents to block or reduce such interactions. Read more>>
Posted by Dr Speedy at 7:33 AM

'Experiments are underway to further elucidate why ACAs are produced in individuals afflicted with CFS.'

Are there any results yet?

I'd like to know as well. Also, is there any way to get this to Fluge and Mella (assuming they haven't come across it already!)

i LOL at most of the news on testing for illneses, ive suffered horribly from cfs/M.E 7 years now, its NOT in your mind! for those who think different i pray they never have to `feel` it themselves.
Answers would be nice

Anyone can tell me why only 7% of ME/CFS patients have Anticardiolipin Antibodies (IGm)in this study ? :

(Sorry I need to headhache the URL)