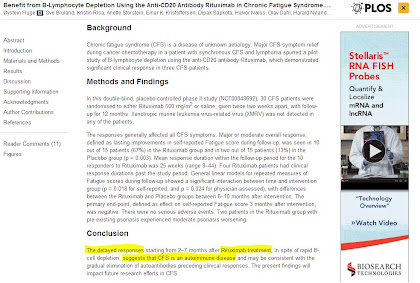 In this double-blind, placebo-controlled phase II study (NCT00848692), 30 CFS patients were randomised to either Rituximab 500 mg/m2 or saline, given twice two weeks apart, with follow-up for 12 months. Xenotropic murine leukemia virus-related virus (XMRV) was not detected in any of the patients.
The responses generally affected all CFS symptoms. Major or moderate overall response, defined as lasting improvements in self-reported Fatigue score during follow-up, was seen in 10 out of 15 patients (67%) in the Rituximab group and in two out of 15 patients (13%) in the Placebo group (p = 0.003). Mean response duration within the follow-up period for the 10 responders to Rituximab was 25 weeks (range 8–44). Four Rituximab patients had clinical response durations past the study period. General linear models for repeated measures of Fatigue scores during follow-up showed a significant interaction between time and intervention group (p = 0.018 for self-reported, and p = 0.024 for physician-assessed), with differences between the Rituximab and Placebo groups between 6–10 months after intervention. The primary end-point, defined as effect on self-reported Fatigue score 3 months after intervention, was negative. There were no serious adverse events. Two patients in the Rituximab group with pre-existing psoriasis experienced moderate psoriasis worsening.

The delayed responses starting from 2–7 months after Rituximab treatment, in spite of rapid B-cell depletion, suggests that CFS is an autoimmune disease and may be consistent with the gradual elimination of autoantibodies preceding clinical responses. The present findings will impact future research efforts in CFS.

ClinicalTrials.gov NCT00848692
Citation: Fluge Ø, Bruland O, Risa K, Storstein A, Kristoffersen EK, et al. (2011) Benefit from B-Lymphocyte Depletion Using the Anti-CD20 Antibody Rituximab in Chronic Fatigue Syndrome. A Double-Blind and Placebo-Controlled Study. PLoS ONE 6(10): e26358. doi:10.1371/journal.pone.0026358
Editor: Markus Reindl, Innsbruck Medical University, Austria
Received: June 28, 2011; Accepted: September 25, 2011; Published: October 19, 2011
Copyright: © 2011 Fluge et al. This is an open-access article distributed under the terms of the Creative Commons Attribution License, which permits unrestricted use, distribution, and reproduction in any medium, provided the original author and source are credited.
Funding: The work received financial support from Helse Vest grant no 911557, and also from the legacy of Torstein Hereid. These funders had no role in study design, data collection and analysis, decision to publish, or preparation of the manuscript.
Competing interests: Haukeland University Hospital has patents and pending patent applications on the issue of B-cell depletion therapy for chronic fatigue syndrome. Family members of WO2009083602 A1 are pending, as well as granted US 12/348024. The two authors ØF and OM are named as inventors in these applications. This does not alter the authors' adherence to all the PLoS ONE policies on sharing data and materials.
Read more @ plosone.org
See also: Study demonstrates that 95% of ME/CFS Patients have Anticardiolipin Antibodies, suggesting that ME/CFS may be an autoimmune condition
Posted by Dr Speedy at 12:45 PM

Are you looking for the perfect match without any responsibility? Take a look on the Rohini Escorts. These escorts are serving for whole night and day. With the extensive range of female escorts’ profile, you can also choose your night crime partner from our Female Escorts in Rohini.