The hell of a disease that is incurable, has inadequate therapies, indifferent government attitudes, social stigma and no strong public voice 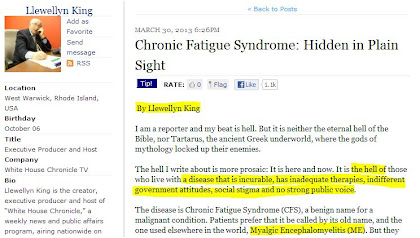 
I am a reporter and my beat is hell. But it is neither the eternal hell of the Bible, nor Tartarus, the ancient Greek underworld, where the gods of mythology locked up their enemies.
The hell I write about is more prosaic: It is here and now. It is the hell of those who live with a disease that is incurable, has inadequate therapies, indifferent government attitudes, social stigma and no strong public voice.

The disease is Chronic Fatigue Syndrome (CFS), a benign name for a malignant condition. Patients prefer that it be called by its old name, and the one used elsewhere in the world, Myalgic Encephalomyelitis (ME). But they are stuck with CFS because that is what the Centers for Disease Control named it when following investigation of a Nevada outbreak that sickened 300 people in the 1980s.

After more than 50 years in the newspaper trade, I chanced upon CFS – which, in my opinion, is the great under-reported medical story of the times -- through a friend and colleague who had been felled in her prime and has suffered relentlessly for 23 years. For two of those 23 years, she was so sick that she could only lie in a darkened room on a couch, which she sometimes thought was her coffin. Read more>>
Posted by Dr Speedy at 3:44 AM