Dr Snell, University of the Pacific, California: ME/CFS patients have a reduced capacity to exercise when they repeat a maximum exercise test one day on – unlike healthy controls 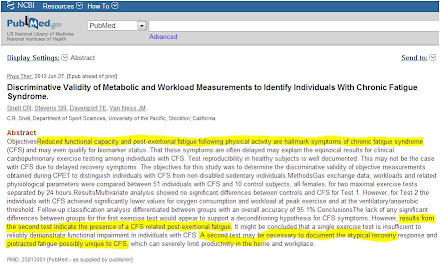 Objectives
Reduced functional capacity and post-exertional fatigue following physical activity are hallmark symptoms of chronic fatigue syndrome (CFS) and may even qualify for biomarker status. That these symptoms are often delayed may explain the equivocal results for clinical cardiopulmonary exercise testing among individuals with CFS. Test reproducibility in healthy subjects is well documented. This may not be the case with CFS due to delayed recovery symptoms. The objectives for this study was to determine the discriminative validity of objective measurements obtained during CPET to distinguish individuals with CFS from non-disabled sedentary individuals.MethodsGas exchange data, workloads and related physiological parameters were compared between 51 individuals with CFS and 10 control subjects, all females, for two maximal exercise tests separated by 24 hours.ResultsMultivariate analysis showed no significant differences between controls and CFS for Test 1. However, for Test 2 the individuals with CFS achieved significantly lower values for oxygen consumption and workload at peak exercise and at the ventilatory/anaerobic threshold. Follow-up classification analysis differentiated between groups with an overall accuracy of 95.1%.
Conclusions
The lack of any significant differences between groups for the first exercise test would appear to support a deconditioning hypothesis for CFS symptoms. However, results from the second test indicate the presence of a CFS related post-exertional fatigue. It might be concluded that a single exercise test is insufficient to reliably demonstrate functional impairment in individuals with CFS. A second test may be necessary to document the atypical recovery response and protracted fatigue possibly unique to CFS, which can severely limit productivity in the home and workplace.

PS: Dr Snell's healthy controls were couchpatatoes to eliminate the effect of exercise.With this study he proofs again that deconditioning does not play a role or is not the cause of relapses. There is simply an underlying physical problem.

This team have established the Workwell Foundation, with offices in California and in Nevada with space in Dr Peterson's office I think. THe University of the Pacific Fatigue Lab has closed. Snell, Davenport, VanNess and Moore all still teach at the U of the Pacific. http://www.workwellfoundation.org/