The Times: Call for review of ‘flawed’ ME research in Lancet letter 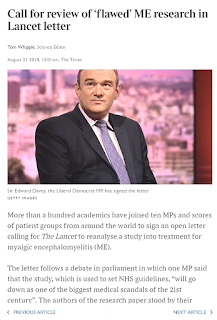 More than a hundred academics have joined ten MPs and scores of patient groups from around the world to sign an open letter calling for The Lancet to reanalyse a study into treatment for myalgic encephalomyelitis (ME).

The letter follows a debate in parliament in which one MP said that the study, which is used to set NHS guidelines, “will go down as one of the biggest medical scandals of the 21st century”. The authors of the research paper stood by their findings and said that the letter represented a campaign to discredit solid research and force the retraction of papers simply because patients disagreed with their findings.

The signatories, who include academics from Harvard, Stanford, UCL and the London School of Hygiene and Tropical Medicine, said that the 2011 Pace trial, which recommended therapy and exercise as a treatment for the condition, had “major flaws” and “unacceptable methodological lapses”.

The £5 million publicly funded trial was published in The Lancet and has informed advice on treating people with ME in the NHS and abroad, but is controversial among ME sufferers. Some claim that its advice perpetuates an idea that the disease, which causes debilitating disability, is all in the mind.

The Lancet declined to comment.
https://www.thetimes.co.uk/edition/news/call-for-review-of-flawed-me-research-in-lancet-letter-l75rvcprh
Posted by Dr Speedy at 4:50 AM