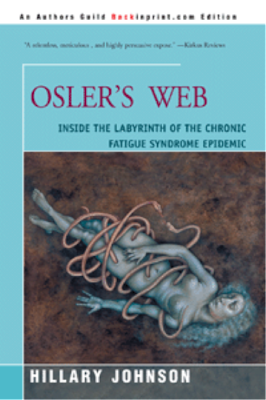 It’s hard to imagine a general patient population that has suffered more horribly than the English, given the remarkable sway of a handful of British psychiatrists, such as Simon Wessely, who dominate and even define the field there.

This cabal continues to propose ever more preposterous explanations for the emergence of this disease in England, their influence leading directly to the incarceration of patients in psych wards, the arrest of parents of patients, one might even claim the death of patients, and certainly all manner of abuse in the realm of treatments and therapy.

Their influence over the fate of the disease “M.E.” in the upcomming 2012 American-issued DSM, the equivalent of the Physician’s Desk Reference for psychiatrists, is a deadly serious matter. Suzy Chapman has been plugging away at this issue for some time now in her worthy series, “Elephant in the Room.” Chapman’s title says it all.

All this bad karma has gone in two directions. Just as CDC definitions have poisoned the discovery process abroad, the British shrinks have been warmly welcomed and courted by various personnel at the Centers for Disease Control ever since Simon Wessely wrote an overture letter to the agency in 1988 hailing the new name and definition. If CDC employees were confused and didn’t know what to think of this new outbreak in the 1980s, the British psychiatrists were happy to give them a leg up on the psychoneurotic theory of the disease that is today the agency’s bedrock position.

A reminder that I was deep in Wessely territory came in the form of news of an invitation refused. Organizers invited Sir Liam Donaldson, the United Kingdom’s chief medical officer, to attend this forum. Indeed, they wanted Sir Liam to hear what would be said on May 29th in the auditorium at One Birdcage Walk so badly that they gathered 2,500 signatures and added them to their invitation. And yet, Sir Liam sent his regrets.
Posted by Dr Speedy at 1:20 PM