ME charity slams 'misuse' of funding 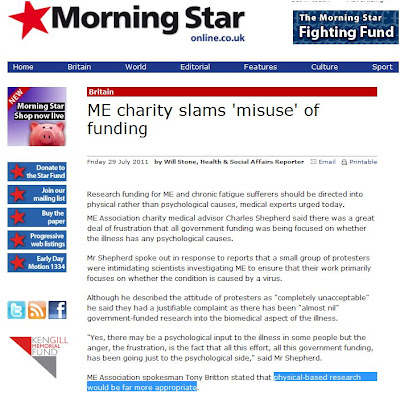 Research funding for ME and chronic fatigue sufferers should be directed into physical rather than psychological causes, medical experts urged today.

ME Association charity medical advisor Charles Shepherd said there was a great deal of frustration that all government funding was being focused on whether the illness has any psychological causes.

Mr Shepherd spoke out in response to reports that a small group of protesters were intimidating scientists investigating ME to ensure that their work primarily focuses on whether the condition is caused by a virus.

Although he described the attitude of protesters as "completely unacceptable" he said they had a justifiable complaint as there has been "almost nil" government-funded research into the biomedical aspect of the illness.

"Yes, there may be a psychological input to the illness in some people but the anger, the frustration, is the fact that all this effort, all this government funding, has been going just to the psychological side," said Mr Shepherd.

He told the Morning Star: "There's still a huge amount of ignorance surrounding ME, it's a vastly misunderstood illness.

"It's hugely frustrating that there are a lot of sceptics in the medical profession who claim the condition does not exist and these research-funding decisions do nothing to disprove them."

A spokeswoman for the Medical Research Council conceded that more research was needed into all aspects of the condition, including what causes the illness, and said the body has announced plans to invest up to £1.5 million investigating its underlying causes.