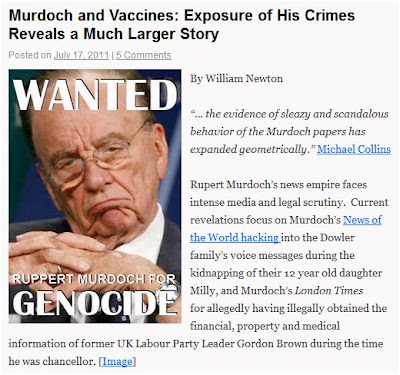 what has not yet been covered is the media circus Murdoch’s London Times created internationally as it fabricated lies against a respected British doctor, with consequences that could impact the lives of billions of children in the world.

Andrew Wakefield was a respected British gastroenterologist who began research into digestive problems in autistic children in collaboration with other doctors in the UK, after being called by parents seeking help. His work indicated severe digestive issues and he asked for more investigation of the MMR vaccine.

Brian Deer is the reporter who savaged Dr Wakefield from the pages of the Sunday Times, a paper managed by Rupert Murdoch’s son James Murdoch who is on the board of GlaxoSmithKline which makes the MMR. Deer researched his case with the help of Medico-Legal Investigations, a private enquiry company whose only source of funding is the Association of the British Pharmaceutical Industry. Deer was both the journalist writing on Wakefield and the person who brought a case of fitness to practice medicine to the General Medical Council, and then wrote about the proceedings as well.

Parents whose children were treated by Wakefield were denied the right to be heard before a real court on claims against the vaccine manufacturers. The High Court judge who denied them was Sir Nigel Davis, whose brother is an executive board member of Elsevier, publishers of the Lancet which removed Wakefield’s 1998 paper on the subject, and is on the Board of GlaxoSmithKline.