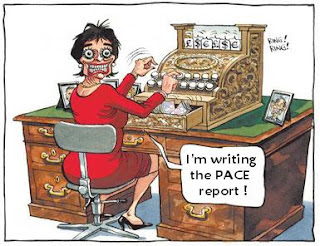 One of the new recruits of the NICE guidelines BLOG, double oo one seven, 001/7, has been quite busy the last few weeks.

I told you yesterday that he used to be a proper 007, one of the many going about their ways of espionage.

He obviously enjoyed all the fruits and pleasantries that come with his job. We have all tasted them when watching Sean Connery and his friends, as 007 on the screens.

But my man, 001/7 has assured me that things in real life are very different indeed. He has enjoyed his spell in the secret business and he got quite a few NICE presents from some of his colleagues when he was kicked out of the house when he had been ill for to long.

One of those gadgets he has used to good effect as you can see in the picture at the start of this BLOG.

He took this picture of the Top Dogina, from the CBT KINGDOM, when she was writing up the report of the PACE trial. Months and months before it had even started, that is. The money was in the bag, another CBT job well done.

Why haven’t you and I not seen this report??? Easy, their PR firm has told them that releasing it before the study has finished, is NOT a good idea.

001/7 has also informed me that he had a peek around the CBT KINGDOM, and they had lots of bottles of old wine, hidden around the place. He couldn’t resist the temptation and he has taken one of those bottles home with him.

As he hasn’t got much power in his body and his arms, all due to his ME, he had some problems opening the bottle, but when he finally managed to get the Fukuda cork out, he was really surprised to notice that this old wine, actually tasted really really well, even in new glasses.
Posted by Dr Speedy at 12:54 AM

Dear Dr Speedy,
We are the legal team who represent the well known crap artist, sorry that should be rap artist known by his stage name of Snoop Doggy Simon.
It is a complete slur on Snoop Doggies reputation to even suggest he has ever pooped in public.
Please issue a apology to Snoop Doggy and we will consider the matter closed. It is not in anyones interest for this to come before a jury,
yours insincerly,
Bully, Threaten and Intimidate (legal advisors to the stars)