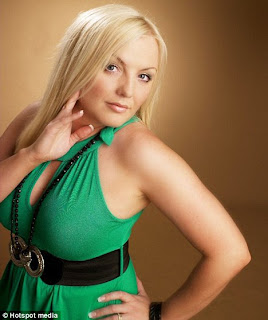 A young woman suffering from a rare brain virus died after being told she was merely depressed because she had not had a baby, an inquest heard.
Jane Harrop, 30, was admitted to hospital in February last year with severe pains in her head and neck but staff told her she was merely suffering a migraine.
Two days later, Jane, from Birmingham, died as a result of a rare virus which had been ravaging her brain and spinal cord for at least two months.
Jane's devastated family are now hoping for answers after she was allegedly 'given drugs to shut her up and left in a corner to die'.
Her husband Dean, 29, said doctors repeatedly failed to spot the virus that was killing her and did not transfer her to a specialist brain ward at a nearby hospital because there were no beds available.
An inquest at Birmingham Coroner's Court heard Jane had been suffering from violent headaches and had complained to her GP nine times over the previous seven months.
She was prescribed anti-depressants and was not referred for tests before eventually she collapsed while out on a walk in Sutton Park on February 11.
The healthcare assistant, who lived with her husband Dean, a builder, was rushed to hospital by her parents but died just eight days later.
Pathologist Dr Martin Carey said Jane's death was caused by inflammation of the brain and spine by an unknown virus, which had taken hold over a long period lasting at least two months, which was rare.
Mr Carey added that headaches were the first sign of the infection, called sub-acute meningomyeloencephalitis.
He said: 'It's a rare condition, I have seen three cases in the past couple of years.'
Linda, 55, said: 'The GP thought she was depressed because she was trying for a baby and hadn't had one. Jane was a happy-go-lucky character. I didn't think that she was depressed.
'She said her brain felt like it was being crushed.'
She added that just before 2am on the morning her daughter died, she went to Good Hope Hospital with her husband after a call from Jane for cigarettes.
But she said they were banned from the ward by a nurse, who said Jane 'only had a migraine'.
Around four hours later, Jane was found unconscious by medics and declared brain dead later that day.
Linda said: 'The sister wouldn't let us in and said, ''It's only a migraine-type headache''. I said, ''It's not'' and she said, ''Well, what is it then?''
'I knew something was going to go wrong and I thought of taking her out of hospital and to Queen Elizabeth ourselves. I'll regret that decision until the day I die.'
Another patient on the ward, Jean Paul, described how nurses ignored Jane's screams of pain during her final night alive. She added that two nurses had taken her into a side room after Jane's death, making her feel intimidated about speaking out at what she had seen.
She said: 'I couldn't help but notice she was in horrendous pain, but the nurses completely ignored her.
'I put some cold flannels on her head and was talking to her. She was screaming in pain and shouting for help, but no one came to her.
Posted by Dr Speedy at 9:22 AM