Unlocked: the secrets of schizophrenia 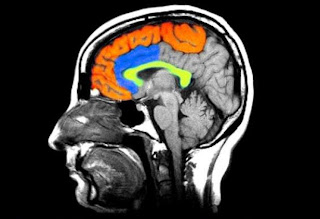 A colour enhanced MRI image of the brain shows one of the theories into what may be the chemical basis for Schizophrenia. Researchers have found reduced receptors for dopamine in the brain (areas colourized)

"Scientists have discovered a remarkable similarity between the genetic faults behind both schizophrenia and manic depression in a breakthrough that is expected to open the way to new treatments for two of the most common mental illnesses, affecting millions of people.

Previously doctors had assumed that the two conditions were quite separate. But new research shows for the first time that both have a common genetic basis that leads people to develop one or other of the two illnesses.

"However, what we've found so far explains only a tiny fraction of the total risk of schizophrenia. Some of us were surprised to find that not only did these genes contribute to schizophrenia but they also contribute to bipolar disorder. So that really suggests that the two disorders are not really as distinct as we thought in psychiatry.""

Shouldn't it be the GOBSARTS who have taken all the taxpayer's money for research and treatment of ME, whilst insisting it is an 'abnormal illness belief' who stand trial for this young woman's death & not her grieving, loving mother?