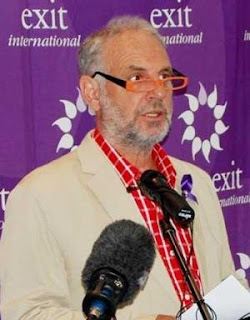 A controversial Australian doctor dubbed "Dr Death" for his promotion of euthanasia will today launch a kit to test the effectiveness of suicide drugs.

Philip Nitschke runs Exit International, which distributes detailed information on how to commit suicide. The new kit, which he plans to sell in the UK for £35, allows people to test the potency of a sedative drug – sodium pentobarbital – to make sure it will be fatal.

A growing number of Exit International's 3,500 members are buying vials of the drug from online shops in Mexico and South-east Asia, but labels detailing the required dose are often missing. The kit lets users extract a tiny amount of the drug with a syringe and then mix it with testing chemicals.

Dr Nitschke and his partner Fiona Short were held for nine hours by immigration officials at Heathrow yesterday before being allowed into Britain to begin their tour.
Posted by Dr Speedy at 1:42 PM