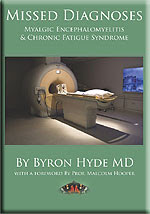 "Where M.E. and CFS overlap, they undoubtedly represent the same illness, however, due to the considerable definitional and conceptual differences, CFS and M.E. should not be considered the same illness."
-Dr. Byron Hyde-

Dr. Byron Hyde, founder of the Nightingale Research Foundation, Ottawa, Canada, has written some of the most insightful articles on the clear distinctions between historically described M.E. and the current CFS definitions. He has also been vocal in criticizing the methods, creation of, and flaws in the CDC CFS definitions (see sidebar).

"Thirty years ago when a patient presented to a hospital clinic with unexplained fatigue, any medical school physician would have told the students to search for an occult malignancy, cardiac or other organ disease or chronic infection. The concept that there is an entity called chronic fatigue syndrome has totally altered that essential medical guideline.

Patients are now being diagnosed with CFS as though it were a disease. It is not.

It is a patchwork of symptoms that could mean anything.

The original concepts of searching for occult disease are relevant to patients today with CFS, ME and other fatiguing illnesses.

Furthermore, because you do not find pathology does not mean there is none."

"Furthermore, because you do not find pathology does not mean there is none."

Dr. Starlanyl's books on fibromyalgia point out that if all test results are negative, it may mean the correct test has not been done yet.

I was told 20+ years ago that I had a virus for which there was no test. When my doctor's death forced me to find another doctor, I was told the tests proved there was nothing wrong, go back to work.

A few years later, another doctor ordered a C-Reactive Protein test, described to me as "off the charts". CRP tests for inflammation/infection, such as viruses for which there is no test.

Unfortunately, too many doctors nowadays believe that if all tests are negative, the patient is faking, because they've been taught to rely on lab results rather than on symptoms/medical history. This does patients a huge disservice.

30 years ago anyone with unexplained fatigue were ignored just as they are now. When I became ill in 1973 I was abused and belittled and patronised and went through 17 years of hell until being properly diagnosed with ME in 1990. I thought maybe diagnosis would help. Instead the nightmare continues. I now know to stay away from doctors even if I have anything else wrong because as soon as they see ME they treat me with open abuse. The idea that it was different in the past is wrong.

A second edition of Missed Diagnoses came out in 2010 which includes the best recent testable definition of ME since Ramsey. http://www.lulu.com/product/paperback/missed-diagnoses-myalgic-encephalomyelitis-chronic-fatigue-syndrome-second-edition/10255089I

A second edition of Missed Diagnoses came out in 2010 which includes the best recent testable definition of ME since Ramsey. http://www.lulu.com/product/paperback/missed-diagnoses-myalgic-encephalomyelitis-chronic-fatigue-syndrome-second-edition/10255089I