New evidence: XMRV has too large a sequence diversity to be a lab contaminant 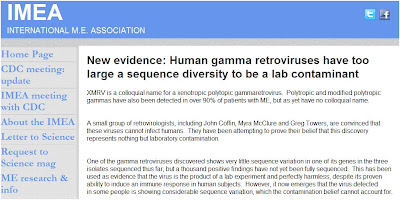 XMRV is a colloquial name for a xenotropic polytopic gammaretrovirus. Polytropic and modified polytropic gammas have also been detected in over 90% of patients with ME, but as yet have no colloquial name.


A small group of retrovirologists, including John Coffin, Myra McClure and Greg Towers, are convinced that these viruses cannot infect humans. They have been attempting to prove their belief that this discovery represents nothing but laboratory contamination.


One of the gamma retroviruses discovered shows very little sequence variation in one of its genes in the three isolates sequenced thus far, but a thousand positive findings have not yet been fully sequenced. This has been used as evidence that the virus is the product of a lab experiment and perfectly harmless, despite its proven ability to induce an immune response in human subjects. However, it now emerges that the virus detected in some people is showing considerable sequence variation, which the contamination belief cannot account for.