Electric BMW with over 500 horsepower 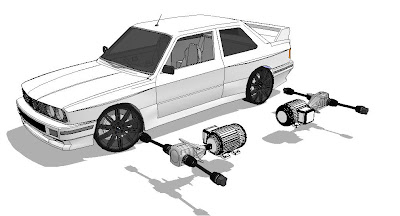 Back in February of 2009, a fellow hailing from Croatia showed up on DIY Electric Car, a forum for EV builders and conversion enthusiasts, saying he wanted to build an electric that is faster than 99 percent of the ICE cars out there.

After many months of trials, tribulations and design changes, "CroDriver" may have done just that.

But then, what else would you expect from a guy who uses a derivation of Newton's first law of motion – velocity is equal to distance traveled divided by time taken (V=S/t) – as the name of his company. Introducing the very slick, very quick BMW bi-moto electric vehicle.

Beyond any doubt blog with usable informations.