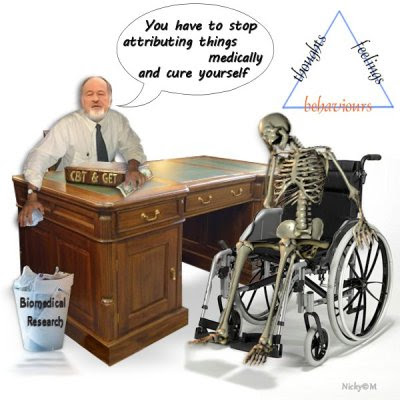 Simpson said he does not assume XMRV is the cause of the illness, but he and many others are deeply suspicious of what they believe are the attempts of scientists to dismiss once more the claims of ME/CFS to be considered a biomedical condition.

They pointed out that it was classified as a neurological disease rather than a psychological illness by the World Health Organisation in 1969.

Listen to some -- or read the internet -- and you would think there is a massive organised conspiracy going on, led by the psychiatric community, but in conjunction with insurance companies and even government, to prove ME has no physical cause.

(There are genuinely distressing stories about the failure of the UK department for work and pensions to recognise that people with ME/CFS can be incapable of work, depriving them of sickness benefits.) Read more>>
Posted by Dr Speedy at 6:00 AM

I just left a comment on this post, I thought it was a new article but I see now it is an archived one, though not actual date just 2010 at end. Still, Sarah Boseley is letting the psychs off far too easily, and we are labelled as 'radicalised' for defending our position.

Boseley's been doing this for years:

Thank you, Suzy, this is useful.