An abnormal odor caused by poisoning is now the trigger "in nearly all episodes of acute mass hysteria," professor Simon Wessely says 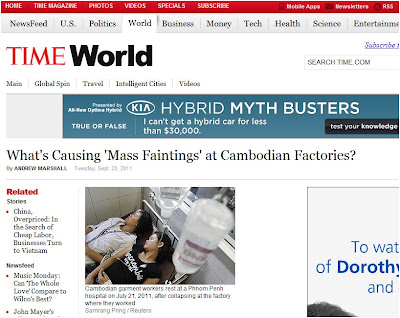 By ANDREW MARSHALL Tuesday, Sept. 20, 2011:
Why are hundreds of female workers collapsing at Cambodian factories? And could it have something to do with Pokémon cartoons, "World Trade Center syndrome" and the Tanganyika laughter epidemic of 1962?

Last week a team of experts from the U.N.'s International Labour Organization (ILO) gathered in Phnom Penh to seek an answer to the first question. In the past three months, at least 1,200 workers at seven garment and shoe factories have reported feeling dizzy, nauseated, exhausted or short of breath, and hundreds have been briefly hospitalized. No definitive explanation has yet been given for these so-called mass faintings. One baffled reporter described them as "unique to Cambodia."

"At any one time there are probably hundreds of episodes happening all around the world," says Simon Wessely, a psychology professor at the Institute of Psychiatry at King's College London. "They just don't normally get reported."

An abnormal odor is now the trigger "in nearly all episodes of acute mass hysteria," Wessely says. In Cambodia, a bad smell was reported at a factory that makes clothing for H&M before some 200 workers collapsed in two separate incidents in August. But investigations by Cambodian officials, the ILO and H&M "have not found any plausible causes so far," H&M said in a statement. "The workers' health, well-being and safety are of importance to us and we [will] do all we can to find the root causes of the incidents." It dismissed a diagnosis of mass hysteria as "speculating."

ILO experts might yet discover a cause that rules out mass hysteria. (In the 1980s, Puerto Rican garment workers diagnosed with hysteria were later found to have been poisoned.) Nevertheless, a decade of unsolved mass faintings reflects unfavorably on Cambodia's garment industry and the famous Western companies it supplies. "This is a wake-up call for the industry to pay more attention to the well-being of the workers," Poutiainen says. "At the end of the day, they have given a lot to Cambodia."

Since the workers are females and have uteri, it must be Hysteria... Simon please tell me why there is no corresponding psychiatric disease for males? Perhaps the better behaved male genitalia never wander around and cause psychiatric disaster?