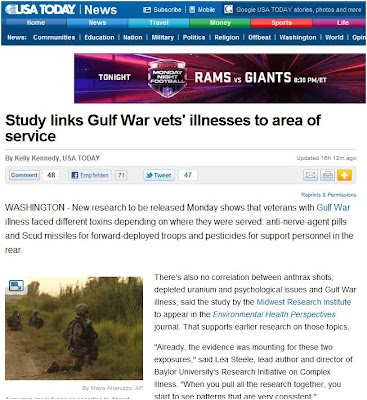 WASHINGTON - New research to be released Monday shows that veterans with Gulf War illness faced different toxins depending on where they were served: anti-nerve-agent pills and Scud missiles for forward-deployed troops and pesticides for support personnel in the rear.

There's also no correlation between anthrax shots, depleted uranium and psychological issues and Gulf War illness, said the study by the Midwest Research Institute to appear in the Environmental Health Perspectives journal. That supports earlier research on those topics.

"Already, the evidence was mounting for these two exposures," said Lea Steele, lead author and director of Baylor University's Research Initiative on Complex Illness. "When you pull all the research together, you start to see patterns that are very consistent."

About one-fourth of the 700,000 veterans who served in the 1991 Gulf War developed symptoms that include chronic headaches, widespread pain, memory and concentration problems, persistent fatigue, gastrointestinal problems, skin abnormalities and mood disturbances."

Steele and her co-authors surveyed 144 veterans with Gulf War illness and 160 Gulf War veterans with no symptoms. But rather than ask them if they were exposed to depleted uranium or anthrax shots, which many troops did not know, they asked about their experiences: Did you receive an injection in the buttocks in theater? Did you have contact with destroyed enemy vehicles? Were you directly involved in ground combat?

Nerve agents, anti-nerve agents and insecticides come from the same chemical family and, therefore, affect the body in similar ways, Steele said. That's why people may have the same symptoms for different exposures, Steele said. But she said the research also does not discount other possible toxins, such as oil fires or fine particulate matter from dust storms.

"We could have solved this a long time ago if ...
there were a smoking gun for a single issue," she said.

They found Gulf War illness was most prevalent in the veterans who served in Iraq or Kuwait — or the combat zones — who took pyridostigmine bromide pills, which were small doses of nerve agent meant to help troops build up a resistance in case of a chemical attack. However, those troops did not report using pesticides on their clothing or skin. These servicemembers also reported being within one mile of an exploding Scud missile.

In support areas, such as on a ship or in Saudi Arabia, Gulf War illness was most prevalent in personnel who used pesticides on their uniforms or skin, the researchers found.

Insecticides used in rear areas are only considered potential causes. Only Army support troops used a 70% DEET insecticide and lindane powder, which is no longer used in the Army. Insecticides now contain only 30% DEET. DEET contains the same chemical that causes problems in nerve agents, but the Environmental Protection Agency has determined it's safe as long as it's used as directed by civilian manufacturers.

Soldiers also used the insecticide permethrin on their clothing. It's designed to last through six months' worth of washings, but the researchers found that improperly trained soldiers applied the solution once a week or even, in some cases, daily.

Steele said there are more published studies due by the end of the year that investigate potential causes and treatment. One treatment includes the successful use of fibromyalgia medication.

"I'd say there's hope on the horizon," Steele said.