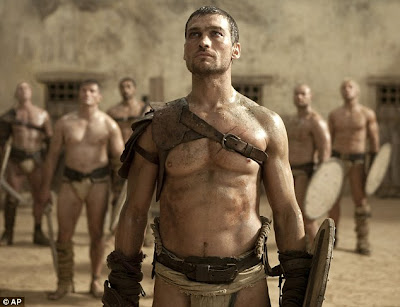 British-born actor Andy Whitfield, star of the TV series Spartacus: Blood and Sand, has died of non-Hodgkin lymphoma, it was confirmed today.

The star, who was born in Amlwch, Wales, but moved to Sydney in 1999, lost his 18-month battle with the disease on a 'sunny Sydney morning in the arms of his loving wife (Vashti),' she said in a statement.

The actor, who was 39, was diagnosed with stage 1 of the disease in March 2010, but was declared cancer-free two months later after beginning treatment immediately in New Zealand.

The actor's Spartacus co-star, Lucy Lawless, also paid tribute to him on her website, saying he was a 'gentle man who never had a bad world about anyone'. However, the cancer returned in September of that year and he was advised to resume 'aggressive treatment'.

Whitfield's wife Vashti paid an emotional tribute to her husband, saying: 'On a beautiful sunny Sydney spring morning, surrounded by his family, in the arms of his loving wife, our beautiful young warrior Andy Whitfield lost his 18-month battle with lymphoma cancer. 'He passed peacefully surrounded by love. Thank you to all his fans whose love and support have helped carry him to this point.

'He will be remembered as the inspiring, courageous and gentle man, father and husband he was.' Whitfield was a virtual unknown when he was cast as the legendary Thracian slave in Spartacus, a role made famous by Kirk Douglas in the 1960 Stanley Kubrick film. The series proved a break-out hit for the Starz network and made waves with its graphic violence and sexuality.

Whitfield appeared in all 13 episodes of the first season that aired in 2010, and was preparing to shoot the second when he was diagnosed with cancer. While waiting for Whitfield's treatment and expected recovery, the network produced a six-part prequel, Spartacus: Gods of the Arena, that aired earlier this year with only a brief voice-over from the actor.

But in January, after Whitfield's condition grew worse, the network announced that another Australian actor, Liam McIntyre, would take over the role.