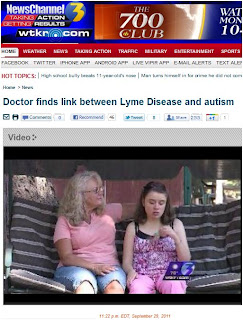 Nineteen-year old Mary Hendricks was diagnosed with severe autism when she was just a baby.

And that was just the beginning. But the Hendricks' did the best they could and took Mary to doctor after doctor.

A specialist questioned Tina about her own health history and that flipped on the light switch.

For years, even before Mary was born, Tina battled colitis, fibromyalgia and just couldn't seem to kick what she says seemed like the flu.

The specialist ordered a blood test for Lyme disease. She tested positive. She got the disease from 2 tick bites she had years before her pregnancy.

"If a child has autism from birth, many times it's because the child inherited an infection from the mother," says Dr. Lynn Mielke.

"As we treat Mary for her Lyme, some of her check list autism symptoms are disappearing!” said Tina.

"I have had patients in my practice with autism who when we treated their Lyme disease, their autism improved so much that they were no longer autistic," said Dr. Meilke.

Dr. Meilke can’t prove that Lyme disease is solely responsible Mary’s autism, but she says Lyme is an infection that can attack the brain.

"I do think that Lyme disease, especially congenital Lyme, is a cause of autism," says Dr. Meilke.

Mielke says Mary’s autism is so far advanced, her improvement may be limited.