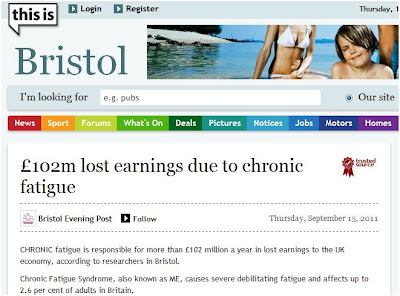 By Bristol Evening Post, Thursday, September 15, 2011: CHRONIC fatigue is responsible for more than £102 million a year in lost earnings to the UK economy, according to researchers in Bristol.

Chronic Fatigue Syndrome, also known as ME, causes severe debilitating fatigue and affects up to 2.6 per cent of adults in Britain.

The new research from Bristol University's school of social and community medicine has been published in the journal BMC Health Services Research. In many cases, people with ME are housebound or confined to their bed for months or years, causing their lives to change drastically and continued employment to become impossible.

Funded by the National Institute for Health Research and the Bristol-based Action for ME charity, the study examined data from 2,170 patients attending specialist services to estimate earnings lost as a consequence of the illness.

Using annual earnings figures from the Office of National Statistics productivity costs among the 2,170 patients were estimated to be equivalent to £44,515 per male patient and £16,130 per female patient. Researchers estimated that each year 4,424 working age adults with ME might be referred for specialist assessment, and that this group would have already incurred productivity costs of £102.2 million due to their illness by the time of the assessment.

Dr Esther Crawley, lead author and consultant senior lecturer at the university, said: "Our findings are important because they show the long-term cost to society, which must be accounted for in estimates of the cost-effectiveness of ME or CFS interventions and service provision."

See also: The main characteristic of ME is an abnormally delayed muscle recovery after doing trivial things, if you don't have that, you don't have ME
See also: RESEARCH shows: ME is caused by an oncogenic virus
See also: Jan 2011, Spanish study shows that CBT and GET make things WORSE in ME/CFS !!! See also: Journal for Psychotherapy 2011: CBT and GET are ineffective and potentially harmful for many ME/CFS patients
Posted by Dr Speedy at 2:22 AM