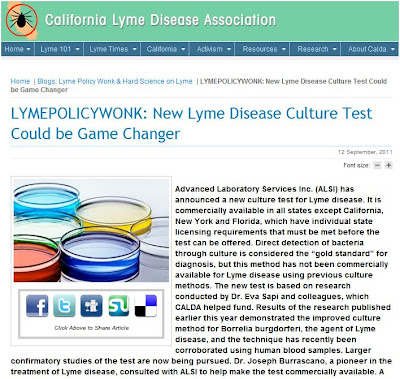 Advanced Laboratory Services Inc. (ALSI) has announced a new culture test for Lyme disease. It is commercially available in all states except California, New York and Florida, which have individual state licensing requirements that must be met before the test can be offered.

Direct detection of bacteria through culture is considered the “gold standard” for diagnosis, but this method has not been commercially available for Lyme disease using previous culture methods.

The new test is based on research conducted by Dr. Eva Sapi and colleagues, which CALDA helped fund. Results of the research published earlier this year demonstrated the improved culture method for Borrelia burgdorferi, the agent of Lyme disease, and the technique has recently been corroborated using human blood samples. Larger confirmatory studies of the test are now being pursued.

Dr. Joseph Burrascano, a pioneer in the treatment of Lyme disease, consulted with ALSI to help make the test commercially available. A sensitive high-quality culture test would not only permit patients to be accurately diagnosed, but would lay to rest much of the controversy surrounding Lyme disease.


One of the primary causes of the Lyme controversy
is the lack of a “gold standard” diagnostic test to determine who has the disease, who has persisting disease, and who has cleared the infection.  Currently available Lyme tests rely on indirect methods of detecting the disease using antibodies produced by the patient. The sensitivity of most of these commercially available antibody tests has been so low that they may miss one out of every two people with the disease.


The testing is now available for use in all states except California, New York, and Florida, which require a higher level of lab certification for testing. Physicians can obtain lab test kits from ALSI in Pennsylvania.  Contact information about the lab can be obtained from their website.


Those seeking further information may wish to read:


My blog post announcing the in vitro culture results.


The LYME POLICY WONK blog is written by Lorraine Johnson, JD, MBA, who is CALDA's Chief Executive Officer. Contact her at lbjohnson@lymedisease.org.
Posted by Dr Speedy at 5:02 AM