Dr Charles Shepherd, medical adviser to the MEA: "it's too early to send out the scientific jury to make a final definitive decision on XMRV and ME/CFS" 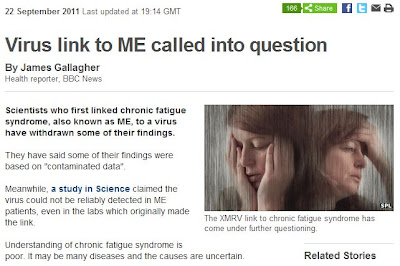 Virus link to ME called into question

By James Gallagher Health reporter, BBC News: Scientists who first linked chronic fatigue syndrome, also known as ME, to a virus have withdrawn some of their findings.

They have said some of their findings were based on "contaminated data".

Meanwhile, a study in Science claimed the virus could not be reliably detected in ME patients, even in the labs which originally made the link.

Understanding of chronic fatigue syndrome is poor. It may be many diseases and the causes are uncertain.

There was a sense of hope for many patients when a study published in Science in 2009 showed that DNA from a mouse virus, XMRV, was present in 67% of patients with the illness, but only 4% of the general population.

Yet other scientists around the world could not find evidence of the virus. Many researchers began to argue that the most likely explanation was contamination of the laboratory samples.

It led to Science asking the authors to withdraw their findings and it published an editorial "expression of concern" saying that the validity of the study was "seriously in question".

The authors have now issued a partial retraction after some of the scientists involved reported contamination, but this only calls into question the information in one table and two diagrams, not the rest of the paper and not the final conclusion.

One of the labs involved, the Whittemore Peterson Institute in Nevada, is standing by the conclusion. One of its lead researchers, Dr Vincent Lombardi, said it was "participating" in the retraction but: "We want to make it very clear that we are continuing the important work of studying retroviruses in association with ME/CFS and other similarly complex illnesses.

"They're saying the rest of the paper still stands, but that is becoming increasingly difficult for them to maintain."

A fresh study on XMRV published in Science, which the researchers behind the original study participated in, again questioned the link.

These samples were sent to nine laboratories, including two which had found the link previously. No lab knew which samples were from which patients.

Only two laboratories, the two which initially proposed the link, detected any cases of XMRV. However, the virus was detected at "similar rates" in both groups of patients, the study said.

The results from the two laboratories were also "inconsistent" even when testing blood from the same patient.

Dr Charles Shepherd, medical adviser to the ME Association said: "These are very emphatic negative or inconsistent findings from the Blood Working Group study, along with the retraction of some of the original supporting data that was published in Science.

"So it is now looking extremely unlikely that XMRV is either linked to ME/CFS or that it has a disease-causing role.

"Having had their hopes raised that a treatable component to ME/CFS had been identified, it's not surprising that people are becoming increasingly disappointed at the way things are turning out.

But it's too early to send out the scientific jury to make a final definitive decision on XMRV and ME/CFS - we still need the results from the other major multi-centre study on XMRV and ME/CFS being carried out in America by Prof Ian Lipkin." 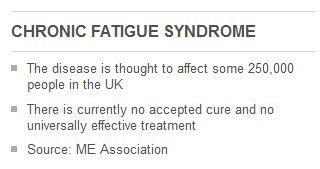