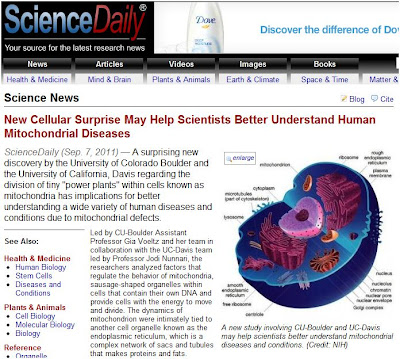 ScienceDaily (Sep. 7, 2011) — A surprising new discovery by the University of Colorado Boulder and the University of California, Davis regarding the division of tiny "power plants" within cells known as mitochondria has implications for better understanding a wide variety of human diseases and conditions due to mitochondrial defects.

Led by CU-Boulder Assistant Professor Gia Voeltz and her team in collaboration with the UC-Davis team led by Professor Jodi Nunnari, the researchers analyzed factors that regulate the behavior of mitochondria, sausage-shaped organelles within cells that contain their own DNA and provide cells with the energy to move and divide. The dynamics of mitochondrion were intimately tied to another cell organelle known as the endoplasmic reticulum, which is a complex network of sacs and tubules that makes proteins and fats.

Voeltz and her colleagues showed that
the division of the mitochondria within cells is tied to the point or points where they are physically touching the endoplasmic reticulum in both yeast and mammalian cells. "This is the first time one cell organelle has been shown to shape another," said Voeltz of CU's molecular, cellular and developmental biology department.

A paper on the study was published in the Sept. 2 issue of the journal Science. Co-authors on the study included CU-Boulder graduate student Jonathan Friedman, researcher Matthew West and senior Jared DiBenedetto and UC-Davis postdoctoral researcher Laura Lackner.
Enclosed by membranes, mitochondria vary vastly in numbers per individual cells depending on the organism and tissue type, according to the researchers. While some single-cell organisms contain only a single mitochondrion, a human liver cell can contain up to 2,000 mitochondria and take up nearly one-quarter of the cell space.

Since numerous human diseases are associated with mitochondrial dysfunction, it is important to understand how the division process is regulated, said Voeltz.
Mitochondrial defects have been linked to a wide range of degenerative conditions and diseases, including diabetes, cardiovascular disease and stroke. "Our studies suggest the possibility that human mitochondrial diseases could result from disruption or excessive contact between the endoplasmic reticulum and the mitochondria."

Previous work, including research in Nunnari's lab at UC-Davis, has shown that mitochondrial division is regulated by a protein known as "dynamine-related protein-1" that assembles into a noose-like ligature that tightens around individual mitochondrion, causing it to divide. The team found that several additional proteins linked to mitochondrial division also were found where the endoplasmic reticulum and mitochondria touched.

"The new function for the endoplasmic reticulum expands and transforms our view of cell organization," said Nunnari, a professor and chair of molecular cell biology at UC-Davis. "It's a paradigm shift in cell biology."