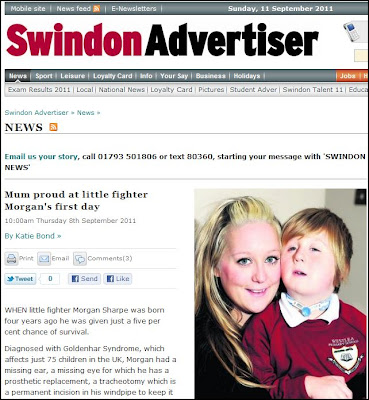 Thursday 8th September 2011, By Katie Bond: WHEN little fighter Morgan Sharpe was born four years ago he was given just a five per cent chance of survival.

Diagnosed with Goldenhar Syndrome, which affects just 75 children in the UK, Morgan had a missing ear, a missing eye for which he has a prosthetic replacement, a tracheotomy which is a permanent incision in his windpipe to keep it open, butterfly vertebrae and fluid in the ventricles of his brain.

''When I picked him up he had a massive smile on his face which made me a bit choked.''

But yesterday the four-year-old defied all the odds as he proudly donned his school uniform and enjoyed his first day at Westlea Primary School.

It was a tearful yet overwhelmingly proud moment for his mum Kerry, who is expecting a baby daughter in January.

Kerry, 26, said: “When I dropped him off in the morning he said ‘Bye mum, love you’ and went off playing straight away, then when I picked him up he had a massive smile on his face which made me a bit choked up. He is such a big boy now.

When Morgan was born, his mum spent weeks at his bedside at Great Western Hospital.

At just a few days old, his chest collapsed and he stopped breathing – he was rushed to John Radcliffe Hospital and needed an emergency tracheotomy. The long process of corrective operations began shortly afterwards at GWH.

“We had never heard of Goldenhar syndrome when
we were told Morgan had it, nobody had,” said Kerry.

“Because we had never heard of it we didn’t know how it would affect him, but as he is getting older they are developing more things that they can do to help him, so by the time he has finished growing I imagine they will have come up with lots of procedures.”

Kerry said she had always hoped Morgan would go to a mainstream school despite health professionals recommending he attend a special school.

“He is really clever, he likes arty things, drawing and painting, sticking, but he’s not so much into the sporty side of things.

“He’s like a sponge, he takes things in really quickly and he had a brilliant first day at school. He absolutely loved it.

“He played cars a lot and made some new friends. They were getting to know each other mainly I think.”

Kerry is hoping that in the future she will be able to take an assembly at the school to explain to Morgan’s classmates exactly what Goldenhar Syndrome is.

She said: “The one thing that worries me is because Morgan looks different to other people, that he will get bullied because children do point and stare at him.

“He is starting to notice when people stare – we were in Burger King the other day and some children kept staring at him.

“He turned to me and said ‘Those people are doing my head in staring at me’ so I told him to tell them, so he did.

“I have told him he is special from day one and he is just such a strong character. He can’t wait for his little sister to arrive.”