Aetna health insurance company: The peer reviewed medical literature does not support Graded exercise therapy (GET) in the diagnosis or treatment of individuals with CFS 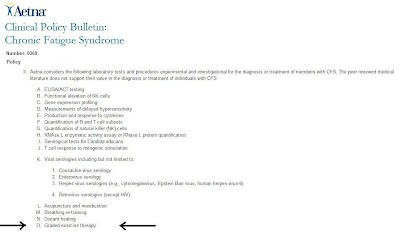 In 2000 Deadria Farmer-Paellmann, head of the nonprofit Restitution Study Group of Hoboken, New Jersey, disclosed that from approximately 1853 to approximately 1860 Aetna had issued life insurance policies to slaveowners covering the lives of their slaves.[67]

Aetna acknowledged that concrete evidence exists for Aetna issuing coverage for the lives of slaves and released a public apology.[68]
Posted by Dr Speedy at 4:11 AM

If you look at Aetna's policy on "CFS" (the deem it synonymous with ME by the way) NOTHING is considered appropriate treatment for said CFS. The list of what they don't cover in terms of testing and treatment is frighteningly specific.

I do not understand why this is not included...

Yeah i also hear about this health insurance company.